US ONLY Death Penalty Poll

85 replies to this topic

So far it seems the 2 in every 3 ratio is understated, let's see how the NON-US one is doing. Last time I checked that too was led by support for the death penalty.

Yes, but not the way we do it.

If you'd asked yesterday, I would have given a flat "yes." But today I read an article that reminded me that our judicial system isn't reliable, and, as a result, it's believed that an innocent man was executed in Texas in 1993. There have also been too many cases recently of death row inmates being exonerated on new DNA evidence. So I voted "yes but not the way we do it."

When we're absolutely sure, when we have, say, a Ted Bundy or BTK, then I have no problem with the death penalty. I used to, on purely philosophical grounds. But then I had to admit that if anyone brutally murdered someone I loved (and that includes my dog), I'd probably be hellbent on killing the murderer myself if the state didn't do it for me. I'm a real barbarian that way.

So, I can't honestly say I oppose the death penalty.

"Although health care enrollment is actually going pretty well at this point, thousands and maybe millions of Americans have failed to sign up for coverage because they believe the false horror stories they keep hearing." -- Paul Krugman

I voted No... but I guess that "Not the way we do it" may have been the better choice.

I am opposed to the DP for the very reason Spectacles mentioned. There are far too many holes in our system to safely apply the FINAL penalty. After we kill them, there is no taking it back and saying "Sorry, we go the wrong guy".

I voted no for the reasons others have already mentioned.  Our justice system simply isn't perfect enough to allow such a final decision to be made.  A life sentence can be corrected when exonerating evidence is found, but we can't bring innocent people back from the dead. 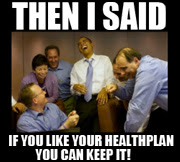 I voted "other". Generally, I feel the system is too flawed for a sure application of the death penalty. Also, I hold out hope that even the worst criminal could possibly find redemption, given time.

Voted yes.  But I think it should be in cases where there is no doubt at all about the person's guilt.

Edited to add:  I posted more detailed comments in this thread:
http://www.exisle.ne...38

I voted no
For one thing, we don't apply it well.  It goes dispropotionatly to blacks and other minorities, making it racist IMO.  Also, it seems too often we find that the person was really innocent some years later.  Third, so many crimes are committed by people who are sick and need treatment.  This does not mean I think they should be wandering the streets again, but if you look at the studies people in jail for violent crimes so many of them are the children of fetal alcohol syndrom or have documentable neurological defects and that's not even getting into mental illnesses like schizophrenia.  I have a lot more pity for someone who has temporal lobe seizures and accidentally kills someone than someone who just decides to go kill someone.

Than again, I would also like to see a lot more funding for homes for the criminally insane and for drug rehabilitation.

We have fourty million reasons for failure, but not a single excuse  -- Rudyard Kipling

Develop compassion for your enemies, that is genuine compassion.  Limited compassion cannot produce this altruism.  -- H. H. the Dalai Lama

No problem A Karas

So I guess predictable result.

Does the US result, so FAR, represent the 2 in 3 conveyed on BBC news?

Roughly, yes. Even on Ex Isle.

In FACT it's roughly 2 out of 3 non-US people who vote No, so it's the reverse, which is quite interesting.

I voted "other" and the reason being that while I have no problem with murderers being put to death, I have real concerns that we've put innocent people to death along with the guilty. Being convicted of murder (or any other crime) doesn't mean the person actually IS guilty. We've seen a bunch of people released from prisons that had spent 15 or 20 years there for crimes they didn't commit. If not for new DNA testing, those people would STILL be rotting in prison. Wasn't there also just a story this past week or so about someone being put to death and it was found that he was actually innocent of the crime?

If we have solid DNA evidence to support the case, then yes, go with Capital punishment but be damned sure you're killing the right person for the crime.

I went with "Yes but not the way we do it" because it comes the closest to what I really think, although it's not quite exactly it.

I have no problem with the killing of murderers, rapists, or people who have committed any other kind of physical assault (which I also count bad driving to be a form of, as well as selling someone a "recreational" drug). For that matter, I have no problem with the killing of thieves, trespassers, vandals, and con artists and other committers of fraud, and I'd consider it for mental/emtional assaults and abuses too if I had a satisfactory way to define which ones are severe enough and which ones aren't. My limit for declaring a person worthless is not very high; if you're harming others, you're harming others, and that's all there is to that. It's not like we desperately need every last one we can have or the population will fizzle away or anything.

But just one thing holds me back from being completely for any of it: it's only OK to do this if the person in question really did the crime, and our "justice" system's ability (and even willingness) to verify who did something and who didn't does not impress me.

I have no problem with the killing of thieves, trespassers, vandals, and con artists and other committers of fraud,

Behavior is not reproducible over multiple trials.

I had voted a while ago.  As has been said by others - our justice system doesn't offer sufficient confidence to me to condemn anyone to death by it - but as a principle I'm not opposed to the death penalty.

If we had a system that was fact finding instead of adversarial - I'd support the death penalty for murderers, arsonists and most cases of rape (controversial statement I know), including statuatory rape or molestation.

Delvo - that seems terribly draconian - and fails to acknowledge the ability of the victim and the criminal to recover...

How does a victim of fruad who lost all savings and is a senior citizen going to recover?

If you encounter any Trolls. You really must not forget them.
And if you want to save these shores. For Pity sake Don't Trust them.
paraphrased from H. "Breaker" Morant

TANSTAAFL
If you voted for Obama then all the mistakes he makes are your fault and I will point this out to you every time he does mess up.

When the fall is all that remains. It matters a great deal.

My playing well with other's skill has been vastly overrated

Member of the Order of the Knigths of the Woeful Countance.

If we have solid DNA evidence to support the case, then yes, go with Capital punishment ...

DNA evidence itself doesn't actually prove anything. All it does is establish ownership of a piece of evidence. It only tells you that this hair/saliva/blood/semen/urine/etc belongs to the accused; it proves nothing about who actually committed the crime. There have been cases where innocent people were found guilty based on "solid DNA evidence". Just because you have a persons DNA at the crime scene doesn't mean they committed the crime. And lets not even talk about police misconduct or the falsifying of evidence.

Our justice system seems to be more about punishing the guilty instead of protecting the innocent.

How does a victim of fruad who lost all savings and is a senior citizen going to recover?

Well having seen a hopsital stay turn into a $100,000 bill is a nice way to see where Con Artists might deserve to be sold for his organs.

If you encounter any Trolls. You really must not forget them.
And if you want to save these shores. For Pity sake Don't Trust them.
paraphrased from H. "Breaker" Morant

TANSTAAFL
If you voted for Obama then all the mistakes he makes are your fault and I will point this out to you every time he does mess up.

When the fall is all that remains. It matters a great deal.

My playing well with other's skill has been vastly overrated

Member of the Order of the Knigths of the Woeful Countance.

Voted no.  I simply do not believe the state should have the right to execute its citizens.  The system is not infallible--in fact, quite the opposite, as Specs, RS, Banapis and others have noted.  Not only is racial prejudice seen--incontrovertibly--in the stats detailing HOW the penalty is applied, but in many cases, exculpatory evidence has come to light after the prisoner has been executed.

Besides whiuch, the death penalty simply isn't necessary when life without parole is an option.  (And, incidentally, is the CHEAPER option).

There isn't enough mommy in the world to further a cause like yours!
Back to Orbis Terrarum

Also tagged with one or more of these keywords: Crime, Punishment, Death Penalty, Poll of EI'ers