Doctor Who: "The Age of Steel"

12 replies to this topic 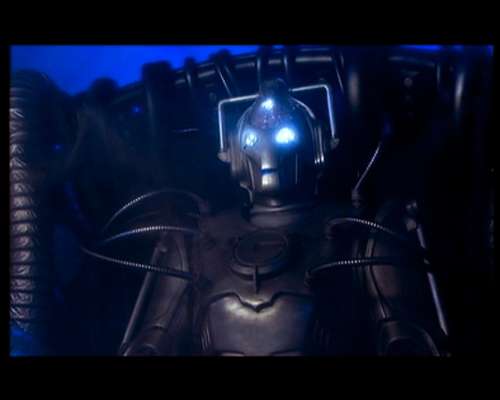 The Doctor and the gang infiltrate Cyberman Central and Mickey steps up to the plate.

Kudos to the sound FX guys for the sounds of the Cybermen marching and the guys in the suits themselves for marching in unison and making you forget they're, well, guys in suits!

There's a touching scene with a downed "Cyberman" that continues to enforce the human predicament/POV that's the strength of the series' run.

Noel Clark, like last week, is really good in this ep.

"In a distant galaxy, twelve planets bearing tribes of the race known as Man have been at war with an alien cyborg race, the Cylon Empire, for a millennium. In the measurements used by the Twelve Colonies it is the Yahren 7341, and a treaty of peace is to be signed - a treaty that proves to be a ruse for the largest assault in the history of galactic warfare. With their defending warships destroyed and their homeworld annihilated, the Twelve Tribes gather to their one remaining warship, a battlestar named the Galactica, boarding every assorted star vehicle that will carry them, as their leader, Commander Adama, seeks out the one planet that will protect Man from the predation of the Cylon Empire - a planet called Earth. As their journey proceeds this fugitive fleet is closely pursued by forces of the Cylon Empire under the command of human traitor Baltar."

I agree, this episode was *much* better than last week's.  Although, I still wouldn't call it my favorite of the season.


Spoiler: click to show/hide
It's a shame that Noel Clark has left the series, I was beginning to enjoy Mickey finally.  I hope we get to revisit the parallel world somehow again.  I somehow doubt that Lumic/Cyber Controller was destroyed by the fall.  I've read some spoilers that Cybermen will reappear later in the season . . . I wonder if these will be "our" universe's Cybermen that originated on another world or the parallel Earth Cybermen.

So far for this season, here's my ranking of the episodes I've seen:

"A million people can call the mountains a fiction, yet it need not trouble you as you stand atop them."

"James Carville emerges from the conflagration riding a burning alligator . . ."

The second part was every bit as good as the first.

It's too bad that Noel Clarke is gone from the series, the actor seemed good enough but the character Mickey was pretty much a waste of time.

"If I knew what was going on I'd really be indignant.&q

You know Cyberman looks like it's in a BoOops not gonna say it!

"If I knew what was going on I'd really be indignant.&q

So no more Ricky/Mickey eh?

I'm sorry to hear that.

So no more Ricky/Mickey eh?

NO NO NO NO!  I was just beginning to like him!

Dissapointing. It  was the kind of emotional payoff that should have been end of season type of thing, or at the very least followed half a dozen episodes of Mickey getting more and more dissatisfied with being the tin dog.

Instead it was one episode after he jumped on board, he left.

The lack of buildup killed the payoff that it should have had.


The Doctor: The universe is big. It's vast and complicated and ridiculous and sometimes, very rarely, impossible things just happen and we call them miracles... and that's a theory. Nine hundred years and I've never seen one yet, but this will do me.

It was a big improvement over the first part, although it still didn't quite come together for me. There are too many dodgy plot contrivances - how come there's a  compatible slot in the control panel just right for a mobile phone. Why was there an override code for the emotion chip etc...

But it stomped along quite enjoyably.


You know if Micky had undergone the Cyberconversion process he'd have become...

Actually, I liked that. Here you have a guy whose just lost his wife, and suddenly this strange woman is claiming to be his daughter and looking for some sort of validation? I'd be running too if that happened to me.


The Doctor: The universe is big. It's vast and complicated and ridiculous and sometimes, very rarely, impossible things just happen and we call them miracles... and that's a theory. Nine hundred years and I've never seen one yet, but this will do me.

I got to see both of the Cybermen stories in a group showing this Sunday and while I couldn'd hear all of the dialogue mainly at the start I did enjoy this story overall, the marching Cybermen were great, Mrs Moore's death and Jackie's transformation were both tragic, the Doctor's message and the way he got it to Mickey was priceless and full of the manic energy that Tennant's Doctor seems to be full of now in special moments and Mickey rescue with the zepplin was incredible.

Overall I loved the reimaging of the Cybermen and the storyline it was fantastic.

saner than an emu on acid

I loved that. In fact, it's the only thing that redeemed the whole Pete storyline for me.

But I want to give Mickey many hugs. I'm very proud of him. He's come a long way since Rose.

Yet another great episode.

"My sexuality's not the most interesting thing about me."
— Cosima Niehaus, Orphan Black, "Governed By Sound Reason and True Religion"
Back to Reviews

Also tagged with one or more of these keywords: Doctor Who, Doctor Who: Series 2