Spoilers for Dark Eyes 1.1 and 1.2 may be contained within. 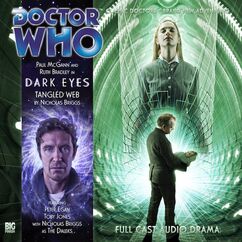 The episode opens with a scene of Molly's parents, freaking out because 2-year-old Molly O'Sullivan is lost in a storm. But there's a knock on the door, and there's a man standing there with little Molly, sound asleep. He was "just passing through," and found her in the storm. The O'Sullivans thank the man and ask his name. It's "Kotris."

So, on the run from the Daleks again, the Doctor can't help but notices that Molly keeps touching the Tardis controls and setting coordinates and stuff. (She doesn't even realize she's doing it.) Furthermore, he wants to know why she seems to remember being in the Tardis before.

He decides to hypnotize her and try some memory regression therapy. She relents and under hypnosis she remembers how when she was two years old, she was lost in a storm . . . and then she remembers a horse-and-carriage appearing out of nowhere. A man emerges and invites her inside . . .

I guess this is the Victorian-era version of the van that says "Free Candy" on the side.

Meanwhile, Kotris and his Dalek pals are consulting a "relativity map," and tracking the movements of Straxus (remember him) through the time vortex. At the moment, Straxus is consulting with the Lord President on Gallifrey, and confirms that Straxus has a temporal drone following him around preventing him from doing whatever he's trying to do (including throwing himself off a cliff on Srangor). Straxus and another Time Lord (named something like Sandin . . .) hop into a Tardis to try to locate the Doctor.

Intrigued by what hypnosis has uncovered, the Doctor and Molly go back to the time she was abducted, and observe it all happening. The horse-and-carriage that appears out of nowhere is actually a Tardis. It's Kotris's Tardis that Molly remembers being inside.

At this point we get a very nice scene between Molly and the Doctor where she reveals more about why she became a volunteer nursing assistant in the war. She was a chambermaid for a well-to-do family and became good friends with the daughter, Kitty. So when Kitty decided to go off to war, Molly went along. Of course, we know the fate of Kitty from Dark Eyes 1.1. And now Molly is just afraid to have hope anymore.

Hope is kind of the theme here. The Doctor tries to give her reasons to hope, and it's really a nice scene. Then Molly starts asking him about his own search for hope (which kicked off this adventure if you recall), and asks him about what happened to Lucie and about Susan . . . but before he can answer, he starts hearing a strange noise in his head and apparently passes out.

When the Doctor wakes, the Tardis appears to have arrived on a lush green planet, and Molly has dragged him out of the Tardis. Before he can really get his wits about him, Daleks appear (again) and Molly and the Doctor take refuge in a cave. A Dalek waits at the entrance of the cave, asking them to come out so it can help. This Dalek is very, very polite.

The Doctor, confused by the polite, helpful Daleks, again hears the odd noise in his head. This time when he wakes, he's been taken into the Dalek city. He learns that he's on Skaro. After the war that wiped out the Time Lords and most of the Daleks, the remaining Daleks decided to try to give peace a chance. They've created a near-paradise on Skaro.

I love that little reference to the Time War. Though Big Finish only has license to use stuff from the Classic Series, there are occasional references to the new series. (In "The Kingmaker" there's a very nifty reference to Eccleston's Doctor.) There have been a few references here and there to the Time War, and in this case the Doctor's reaction is that there's no way the Time Lords would all be destroyed. This refusal to accept such a premise leads him to believe (correctly) that this is all some kind of mind trick.

With the curtain pulled back, Daleks arrive on the scene and start exterminating everyone. At that point, Straxus and that other Time Lord pop up. Straxus explains that there's some renegade Time Lord he's calling "X" who is trying to destroy the Time Lords with the help of the Daleks, and that they're using Molly O'Sullivan somehow. He gives the Doctor coordinates to Srangor where "X" and the Daleks are trying to pull off their mysterious plan, and says the Doctor can't take Molly with him, because that's exactly what "X" wants.

And then, of course, Daleks show up and try to "time ram" Straxus' Tardis and it's about to explode . . .

On the one hand, this episode is a little better than "Fugitives" because it doesn't consist entirely of RUNNING FROM THE DALEKS. And there are some great scenes between Paul McGann and Ruth Bradley talking about hope. We're also getting a few more answers finally. Kotris took Molly when she was 2 years old, and did something to her that makes her vital to whatever his plan is.

The depiction of Peaceful Skaro is interesting, too. We have Daleks walking around (oozing around) outside of their travel machines, chatting away happily with Molly. There's that nifty reference to the coming Time War -- although this happy Dalek fantasy is fake, it was also apparently created from the Doctor's subconscious. Perhaps he really does have HOPE that the Daleks can learn peace. Although this flies in the face of his repeated insistence that Daleks aren't capable of it, perhaps the Doctor really does think it's possible.

A bit too much time is spent on fake-Skaro, and like "Fugitives," it felt like a bit of wheel spinning. We're only making very slow progress toward the conclusion, and having so much of the hour spent in a created fantasy feels like padding. But in retrospect this is a better episode than I remember. Part of that is because this is my second time listening to this story, I can already put a lot of the action into the bigger context.

One more to go, and then it's on to Dark Eyes 2, which was released last week! Woo!

"Someone must have slandered Josef K., for one morning, without having done anything wrong, he was arrested."
Back to Reviews

Also tagged with one or more of these keywords: Big Finish, Paul McGann, 8th Doctor, Dark Eyes, Doctor Who