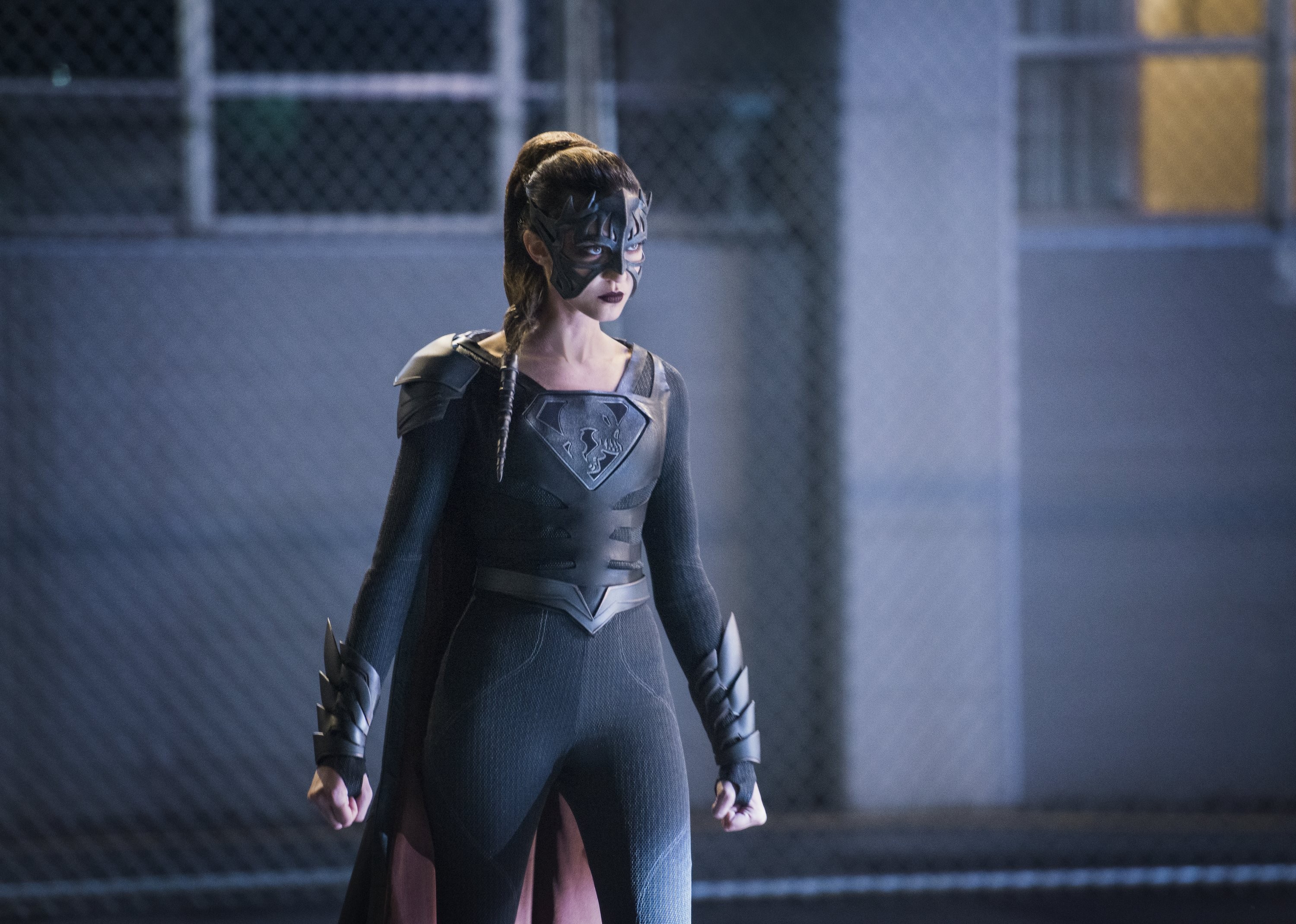 Struggling to heal from her injuries inflicted by Reign (Odette Annable), Supergirl (Melissa Benoist) remains in a dreamlike state, unable to be reached. Mon-El (Chris Wood) recruits one of the Legion members, Brainiac-5 (guest star Jesse Rath), to try to bring her back. Meanwhile, Reign continues her rampage on the city so the DEO teams up with the Legion of Superheroes to try to stop her.

I liked this episode a lot, though I did have my problems with it. I'll get those out of the way first.

I am not liking this new Mon-El. Technically, that's not a problem for just this episode but I'm bringing it up here. I wanted to see him mature and become a hero but they've taken out all of the fun of the character. It doesn't help that he's now married and causing all kinds of angst. He did have some of his old spark here when he played Bon Jovi to lure out Reign.

The Legion costumes were pretty disappointing. I was hoping for more comic accurate costumes and instead we get black leather. *yawn*

Has nobody questioned where Sam has been all this time? Does she really have time to wipe out sin and run L-Corp and be a mom to Ruby? They did ship Ruby off with a friend, so there's that. Is it horrible of me that I was kind of hoping they'd kill off Ruby?

Oh, and they mention Superman but no reason is given for why he hasn't come to help. I get that he can't come for every emergency but a new Kryptonian that has been called a devil and plans on killing everyone just beat Supergirl into a coma. You'd think he would show up.

On to the good stuff.

I like that Reign has a mission beyond just being evil. She is here to get rid of sin, and those that harbor sin. Which would be everyone, I'm assuming. Her mandate makes her more interesting than just a run of the mill bad guy.

They are going to introduce the other Worldkillers. I was wondering if they would.

J'onn as Kara listening to Lena talk about Jimmy and how good of a kisser he is was great. Just so comical.

The DEO's plan to lure Reign to the bank and use the Sundown weapons on her was a good one. It's just too bad she isn't hurt by kryptonite as much as Supergirl.

Brainiac 5 was a hoot. I thought the actor did a phenomenal job in portraying him. He could have come across as really cold and egotistical but instead he was kind of charming and awkward.

The fight between the Legion and Reign was well done. I was hoping they would use their ship against her and they did. When Supergirl showed up I cheered. It was nice to see that she still wasn't at her best. The little that she did seemed to knock it out of her. Well, that and the kryptonite.

Kara seems ready to embrace her human side again, finally. I wasn't a fan of Kara shutting that side down, though I completely understood why she did. She also seems ready to start moving on from Mon-El. Maybe with a certain 12th level intellect?

Interesting revelation that something called the Blight is annihilating worlds in the 31st century and the key to stopping it is literally in the DNA of the Legion. I'm hoping there's a trip to the future in Supergirl's, well, future.

Supergirl had more chemistry with Brainy in this episode than she's had with Mon-El through the entire series so far.

I love that he seems to be channeling LSHAU Brainy (both with the hair and the general adorkability) as opposed to the more serious/arrogant comics version.

Well, in fairness, she actually had an opportunity to sit and talk with Brainy while working to resolve her own issues, which is something she never truly did with Mon El.

Mon El, just had this pseudo-obsessive component to the relationship, not helped by the fact that he was being presented as something of a playa.  Both his attraction to her, and hers to him seemed contrived, and that she’d become SO clingy in the face of his parent’s wishing to reclaim their son, just struck a sour note to me.  Mon-El was not that admirable a character, and when he does try to do the right thing (well, prior to mom going “a little funny in the head” and killing dad), Kara interferes.  Yeah, I get the whole first love/obsessive bit, but it struck me as a mite disrespectful if she did genuinely love him.

And that’s the thing.  Kara and Brainy apparently do respect each other, and can appreciate the other’s efforts, which … well, I feel is a better foundation for a friendship (if naught else).

I was surprised to see that they opted to give Imra (Saturn Girl), force-fields and telekinesis as opposed to telepathy which is her power in the comics.  But then, I guess, this would’ve then had her, instead of Brainy, interacting with Supergirl in her mental cell; and they might’ve devolved into girl-talk about their mutual acquaintance as opposed to actually solving Kara’s quandary.

#5 Lord of the Sword

I was so so about this episode.

Completely agree about the "yawn" aspect of their costumes.

I too was also wondering why Superman didn't show up, after Kara was beaten into a coma. And no explanation for it just irked me.

While the DEO's plan of bank robbery to lure Reign out was a good one, maybe having a knock down drag out fight with her with all those civilians around...not the best plan.

Re: The Kara/Mon-El relationship. I liked it. Sure, the two were very different but I felt that they complemented each other nicely. Kara made Mon-El a better man who came around to putting others before himself. Mon-El, I felt, helped Kara loosen up a little and have more fun. I don't think that their relationship would have lasted long in that form but I do think that as the two characters are now they'd have a chance (except for Mon-El being married). I do admit I'm biased because I find Mon-El sexy.

To be fair, the threat the Legion are facing in the future is a threat to the entire universe and these three are the only ones who can stop it. Plus, to them the deaths caused by Reign have already happened. They know that Reign kills some people but is eventually stopped.

While the DEO's plan of bank robbery to lure Reign out was a good one, maybe having a knock down drag out fight with her with all those civilians around...not the best plan.

There were no civilians. They were all undercover agents. I thought the same thing you did but I noticed that in the background even the "civilians" had weapons.