I thought I would review some of the episodes from Classic Who as I watch them. I'm not sure if I will review all of them or skip some. I might not do them in order either as I might skip around between the various Doctors though so far I have mainly been watching the 5th Doctor episodes in order. 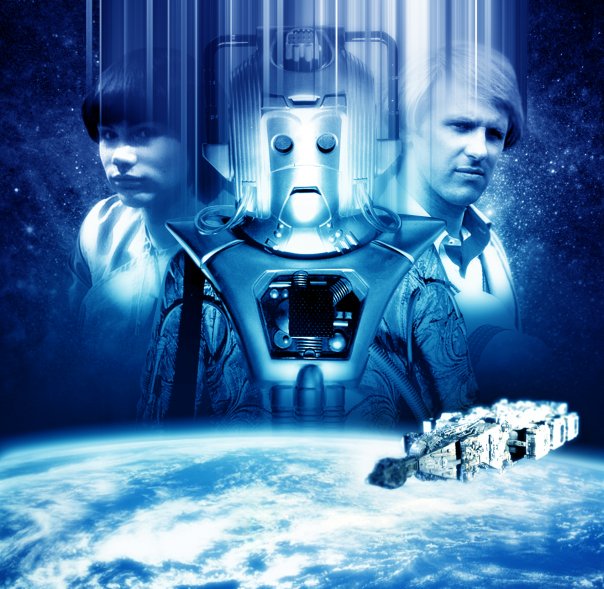 I’d rate this the best serial in the 5th Doctor’s first season, with Black Orchid being second best. My main problem with most of the other serials in this season is that they felt padded to fit four episodes so there was a lot of the Doctor and the companions wandering around doing nothing. To be fair, there is some of that in Earthshock but on the whole the pacing is rather good.

The reason the pacing works better than most of the other serials is because the episode moves around a lot. At first I thought all four episodes would be spent in the caves and surrounding areas but the action moves into the freighter at the end of the second episode. The stakes also keep getting raised and it feels like the Cybermen are always one step ahead of the Doctor.

The parts where the soldiers, the Doctor, and his companions wandered the caves weren’t mind numbingly boring like similar scenes in past episodes. The scenes showing the soldiers being hunted down by the androids were well executed and had some nice tension, especially once we were shown what happened when the androids killed a person.

I know most of DW fandom hates Adric but I don’t really have a problem with him. Mind you, my main exposure to him has been this single season so maybe if I watched more episodes with him in it I’d dislike him as well. Still, while he does act bratty here I think he has genuine reasons. Adric is like the baby brother amongst the companions, and they don’t always take him seriously or give him a lot of attention. That’s what his attitude is really about. As he states himself, he doesn’t really want to return to E-space. He just wants the Doctor to spend time with him. He’s a young man who sees the Doctor as a father figure and wants “dad” to pay attention.

Mind you, he does demand attention at the worst times. Take for instance when the Doctor is trying to defuse the bomb that could blow up the planet. Adric demands to be told what the Doctor is doing. Not the right time, Adric.

His death is sad, despite the fact that I knew it was coming. I think one of the reasons why it works is because we the viewers know that it is a wasted death. The freighter was destined to hit the Earth and wipe out the dinosaurs so humanity could flourish. That doesn’t take away from Adric’s actions. He thought he was saving the planet, so he still goes out a hero.

Obviously, the reveal that the Cybermen are the villains isn’t a secret to me. From what I understand this was the first time the villains had shown up in many years so it must have been quite the shock to fans at the time, though.

I think they are used quite effectively here. They have a good reason for attacking Earth and have multiple plans to carry out said attack.

The scenes where the Cybermen escape from all the containers and march towards the bridge is pretty chilling. They are almost unstoppable, mowing down a lot of the soldiers and security forces. When they lay siege to the bridge it is a tense siege as the Doctor tries to devise ways to protect both entrances.

I did have a problem with the CyberLeader, though. He rants against emotions and declares them useless but he shows a lot of emotions himself. It kind of ruins any dialogue between him and the Doctor as they argue about whether emotions are a help or a hindrance when the CyberLeader seems more emotional than the Doctor.

Oh, it was pretty comical to see two Cybermen standing around just shooting the breeze. I wonder what they were talking about?
Tegan has a good showing here. She asserts herself quite well and she joins the soldiers to help stop the Cybermen. She proves her worth too by taking some of the mechanical monsters down. Tegan also seems to show the most emotion at Adric’s death.
On the other hand, Nyssa is once again relegated to mainly being stuck in the TARDIS and not doing much. She doesn’t have much of an impact on the serial.

You know, I feel like this Doctor doesn’t have the same force of will as the others. What I mean is the Doctor can usually insert himself into any situation and take over pretty quickly. The 5th Doctor seems more laidback and tends to go with the flow. Even when he does try to protest his innocence (like in Black Orchid and here with the soldiers and then the freighter crew) he usually isn’t believed until there is incontrovertible proof of his innocence.

I’m not knocking this Doctor. I do like him. It is just something that I noticed that made him seem different than other incarnations.
I was pretty shocked when the Doctor grabbed the gun and killed the CyberLeader. I did not see that coming.

One problem with the episode is that there are just too many characters between the Doctor and his companions, the soldier, the archaeologist, and then the crew of the freighter. I couldn’t tell you any of their names at this moment without looking it up.

Also, the reasoning behind how the freighter suddenly traveled back in time was dumb and not explained well at all. I get that this is Doctor Who and there’s always an amount of timey wimey to the time travel stories but for what is a pretty crucial plot point the writer seemed fine with just doing the bare minimum to make it happen. At least there was some foreshadowing of the freighter’s ultimate fate since the Doctor, Tegan, and Nyssa did discuss the fate of the dinosaurs at the beginning of the serial.

Those quibbles aside, I found Earthshock to be a riveting four part serial and, as I wrote above, the best of season 19. I thought it had to be the season finale and was surprised to see one more serial after this. It makes sense though. The ending to Earthshock is depressing and I doubt that’s how the powers that be wanted to end the season. It is just too bad that the next serial was nowhere near as strong as this one.

I did have a problem with the CyberLeader, though. He rants against emotions and declares them useless but he shows a lot of emotions himself. It kind of ruins any dialogue between him and the Doctor as they argue about whether emotions are a help or a hindrance when the CyberLeader seems more emotional than the Doctor.
This is true of almost any story that tries to pit logic against emotion. Enterprise, in their depiction of Vulcans, was a pretty bad offender as well.

Also tagged with one or more of these keywords: Doctor Who, 5th Doctor