Godzilla: King of the Monsters

7 replies to this topic 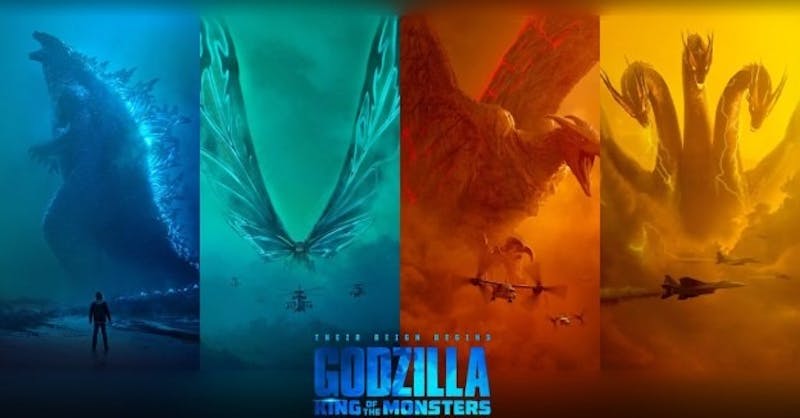 It sucks that this movie isn't doing better at the box office because, IMO, it is a fantastic movie. It gave me everything I could have wanted out of a Godzilla film. I could tell that the filmmakers love Godzilla and that came through on screen. Honestly, I had a big grin on my face for a majority of the movie's run time.

The movie takes place five years after the original. Godzilla hasn't been seen since he defeated the MUTOs. Monarch has discovered locations for 17 other hibernating Titans (what they call kaiju in this movie) though they aren't sharing that information with the governments of the world which has led to calls for Monarch to be disbanded.

In the midst of this an Eco-terrorist group invades one of Monarch's labs and kidnaps Emma Russell and her daughter Madison. Emma, along with her estranged husband Mark, created a device called ORCA which can tap into the frequencies the Titans use to communicate and give the creatures orders.

The terrorist group plans on releasing the Titans one at a time. They believe that Earth is on the brink of a disaster that it won't recover from. They hope that the Titans will bring a natural balance back to the planet. Yes, a lot of people will die but it won't be an extinction level event and humanity will be able to rebuild.

Monarch recruits Mark to help them find the ORCA and save Emma and Madison. Mark would rather see all the Titans killed because he lost his son when Godzilla and the MUTOs fought.

Things go from bad to worse when the terrorists release King Ghidorah. They don't realize that Ghidorah is an alien so he isn't part of the Earth's balance. Ghidorah, being an alpha Titan, takes control of the other Titans and send them rampaging across the planet. The only hope is to have Godzilla defeat Ghidorah and become King of the Monsters.

Like the first movie, the human drama isn't all that great. For the most part I didn't care about the Russells. There's a twist concerning Emma and Madison that makes it harder to care what happens to them. In fact you could remove Madison from the movie and not much would change. She does one plot important thing at the end of the movie and that's about it.

I did like Mark's hatred of the Titans, Godzilla specifically, and wish the movie had done more with that. This is a guy who goes from wanting to see Godzilla killed to having to help Godzilla stop King Ghidorah. That is a much more interesting arc than trying to save his family.

Seriwaza returns and is great. In fact I liked all of the Monarch scientists and soldiers. They aren't the most well rounded characters ever but they are played  by likeable actors and that makes you root for them.

The giant monster action is where the movie shines. We see them early and often. It doesn't take long for the Titans to get released and we get a big fight between Ghidorah and Godzilla pretty early on. The final battle is awesome as Godzilla, Ghidorah, Rodan, and Mothra duke it out.

Rodan gets one big sequence to shine as he gets released from a volcano, destroys a city, and chases after Monarch's flying fortress and fighter jets. Mothra is seen as a larvae at first, goes into a cocoon, and then emerges to take part in the final battle.

There are a ton of easter eggs throughout the movie for Godzilla fans. I recognized a lot but probably missed a ton as well.

Kong and Skull Island get name dropped a lot and the ending of the movie sets up the sequel, Godzilla vs. King Kong. That could be the final movie in this series since KoTM hasn't done as well as many people predicted. If it does end up being the last movie I'll be okay with that. This movie was a fantastic kaiju movie and gave me everything I could have wanted from a giant monster movie.

This is a summer blockbuster done right. It is massive spectacle and a lot of fun. While the human drama could have been better people don't go see Godzilla movies for the humans. They go for the monsters and the movie gets the monsters right. If you wished that Godzilla 2014 had focused more on Godzilla and the MUTOs you won't be disappointed here. The Titans are clearly the stars of this movie.

Hmm. A giant monster movie might be just the thing.  So this is a sequel to the Godzilla remake from just recently, and is it also related to the recent King Kong movie?  So there will be at least four movies in the franchise?

There seemed to be something of a mish-mosh of plot elements from Godzilla – GMK, and Godzilla vs. Destroyah, that while delivering the Toho 4, relegated the other 13 monsters to brief cameos that didn’t really let us see much of them.  There was some crab-like monster, there was the Trunkless Mammoth, along with the MUTO (and I have to wonder at the MUTO making obeisance to Godzilla, given their depiction and categorization in the first movie), and it looked like a couple of others, and I think the rest were still contained.  And finally, the whole human story line was full of sound and fury, but not much sense … although it was good to see Charles Dance (aka Tywin Lannister) back in action.

I’m lamenting that they opted to tie Godzilla to Atlantis in the Atlantic, as opposed to Mu/Lemuria/Seatopia in the Pacific.

I did like that the score incorporated the classic Godzilla and Mothra themes.

I’ll grant that there was an interesting cast of characters among Monarch’s scientists, but this film elevates Monarch to the level of SHIELD in terms of lack of clarity over what it is and just where its resources are coming from when it is not part of the military.  The USS Argo, might as well have been a SHIELD Helicarrier for all that it carried on it, and what all it could do; then there is that submarine that looks more Russian than American.  I’m thinking that the art department and script writers hadn’t really thought through all of Monarch’s mechas when they were crafting this film, and I kind of wish that Monarch was still required to call on the military to intervene when things went wrong (which could have led to the whole question of why they shouldn’t simply hand everything over to the military in the first place).  Especially if Monarch was supposed to be off the books and strapped for cash.

All in all, it was OK … I just wish they had done more with what they had.

So this is a sequel to the Godzilla remake from just recently, and is it also related to the recent King Kong movie?  So there will be at least four movies in the franchise?

Yes, this is the third film in the Legendary MonsterVerse after Godzilla (2014) and Kong: Skull Island.

I’m lamenting that they opted to tie Godzilla to Atlantis in the Atlantic, as opposed to Mu/Lemuria/Seatopia in the Pacific.

Also, if he's a benevolent kaiju that came from Atlantis and exists to preserve the Earth's balance, that's more like '90s reboot Gamera than Godzilla.

Admittedly, in reviewing the original Gamera films, I have to concede that Gamera was actually a better defined concept (loopy as it was) and character than Godzilla.  The connection with kids/humanity was established from the get-go (as was his association with Atlantis), along with the notion that he was not automatically malevolent, but did have his own priorities.

Whereas Godzilla was all over the place depending on the treatment -- for all that they had retained the dinosaur transformed from the H-bomb origin, it seemed they couldn't really settle on a given depiction ... other than being an unstoppable-ish force, that humanity must come to terms with.  While a decent concept, I just don't think the scripts of any era really developed him as a character.

Gloriosus
the G-man Himself who always was a Godzilla fan.

I think Godzilla has some consistent character traits across a fair portion of the franchise. He's persistent; no matter the setbacks, he never loses his relentless focus. And he's adaptable. He's not just brute force, but a smart, strategic fighter who uses lateral thinking to find ways to beat seemingly overpowering foes. Even the 2014 movie got that part right, which is one of the things that made it feel authentic to me despite them turning Godzilla into a Gamera-like protector kaiju.

there was the Trunkless Mammoth
That's like a day without sunshine.

Also tagged with one or more of these keywords: Godzilla