Doctor Who: The Power of the Daleks 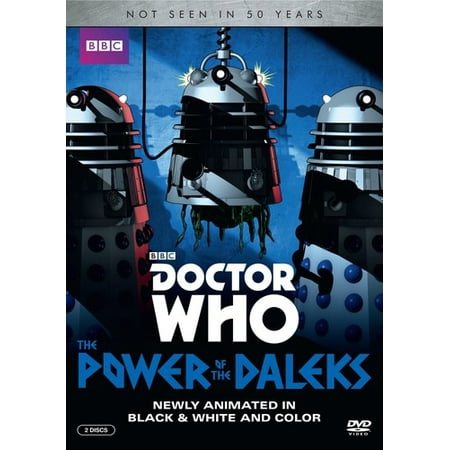 Here is the 2nd Doctor’s first story and the first regeneration story. Sadly, the original episodes no longer exist so this is an animated version using the dialogue from the episode that a fan recorded when this first aired.

The animation is a mixed bag. From what I read after watching the six-part serial the animation team had a small budget and even smaller time frame to create this special so it could be aired on the 50th anniversary.

I watched this in black and white and haven’t seen the color version yet. Just a heads up for those interested. Everything looks good. The characters are drawn well and all look distinct. The Daleks look properly menacing. There are some truly beautiful shots (like the two powered down Daleks covered in softly fluttering cobwebs).

The problem comes when the characters have to do anything but stand there and talk. The movement is very herky jerky and looks like something out of a South Park episode. It does seem like the animators tried to keep movement to a minimum which leads to a lot of static shots which isn’t all that exciting.

With a lesser story the mixed bag that is the animation could have been a death knell. Thankfully, The Power of the Daleks is an excellent story that avoids most of the pitfalls of a six part story. Don’t get me wrong. It tends to drag in the middle section and it could have been much better had it been cut down to four parts but it kept me engaged while watching and had some nice twists and turns.

The basic story is that the Doctor has regenerated for the first time and companions Ben and Polly have no idea how to react. It doesn’t help that this new Doctor doesn’t seem to want to clarify the issue all that much. Instead he races out of the TARDIS and into a new adventure.

The TARDIS team find themselves on the planet Vulcan and in the midst of a murder mystery, a rebellion against the government, and a potential Dalek attack. It’s not a good day to be on Vulcan. The Doctor inserts himself into matters by pretending to be the Examiner sent by Earth. The real Examiner is dead and part of the murder mystery plot.

The Doctor quickly discovers the Daleks but the head scientist Lesterson says that he has complete control over the Daleks and that they are there to act as servants. No one listens to the Doctor that the Daleks will eventually kill them all.

I have to say, for what is the first regeneration story it doesn’t seem to do a great job of easing viewers in. Ben and Polly question whether this new Doctor is the real Doctor and he doesn’t really reassure them or explain things all that well. The story also throws in tons of plot and new character so the viewers never really get to adjust to the new Doctor.

I do like the 2nd Doctor. Of course I have seen him in action in both The Three Doctors and The Five Doctors so I have a handle on his space hobo persona. It was fun and a nice change of pace to see him as the only Doctor and be the focus of the story.
He is definitely different to the 3rd Doctor. He is more content to sit back and let events unfold whereas Three likes to be in the thick of things and in control.

If I have one gripe it is that the Doctor comes off as largely ineffectual here. He can’t get anyone to listen to him and he seems largely unconcerned when Polly and then Ben are kidnapped.

Speaking of, both Polly and Ben seem like decent companions but it is hard to get a real read on them from this story. They are largely reacting to the Doctor’s change and then the various schemes that are unfolding around them.

The story moves at a pretty good pace and with so many different but interconnected plots you can’t say that the story is boring. It all comes together quite well and leads up to a thrilling ending.

I did feel like the rebellion was never fleshed out to my liking. We aren’t ever really told what their demands are or why they feel they have to overthrow Hensell when he is presented as a good governor. It made that part of the plot feel rather weak.

The fact that the humans are the true monsters was great. Don’t get me wrong. The Daleks are their usual evil selves and they kill plenty of people. However, it was human pride, hubris, and greed that allowed the Daleks to be freed from stasis and the time and power to grow their ranks and attack. If the colonists hadn’t been fighting each other the Daleks never would have been able to execute their plans.

All in all, this was a really good story that introduced the new Doctor and had an engaging plot. The Daleks are a fearsome foe here but the humans are the real enemies. While the story does drag at times, the animation isn’t as good as it could or should be, and some elements of the plot feel undercooked, I highly recommend this animated classic.

Unless a miracle happens, this will probably be the only way that this pivotal story will ever be shown. It seems as if the BBC is committed at the moment to releasing more lost animated classics since they just released The Macra Terror (which I will be watching and reviewing soon). I just hope that they give the animators more time and money to allow these stories to be shown in the best way possible.

It's such a shame that so many episodes were lost, and it's especially sad that the first Regeneration is among them.  The BBC should consider doing a Kickstarter or something so that they can afford better animation for these restored episodes-- with all of the zillions of fans all over the world, I'm sure it would be very successful.

I have to say, for what is the first regeneration story it doesn’t seem to do a great job of easing viewers in. Ben and Polly question whether this new Doctor is the real Doctor and he doesn’t really reassure them or explain things all that well. The story also throws in tons of plot and new character so the viewers never really get to adjust to the new Doctor.

Well, it's not like they'd ever done it before. Although I think having B&P question whether this was really the Doctor was intentional, because the audience would be wondering the same thing. B&P were the surrogates for the audience in coping with the disorientation of a new Doctor and the uncertainty of whether they could accept him.

Also, the uncertainty of whether the new Doctor really knew what he was doing was intentional too, to inject an air of suspense. It's similar to the early Hartnell days where it wasn't clear if the Doctor was even trustworthy or ethical. The companions were still meant to be the main viewpoint/identification figures, with the Doctor as a man of mystery and sometimes a source of tension. Of course, Hartnell's Doctor had become a lot more domesticated and friendly over time, but making his successor a bit unreliable was a way of injecting some new uncertainty, or at least of establishing a contrast with his predecessor.

I did feel like the rebellion was never fleshed out to my liking. We aren’t ever really told what their demands are or why they feel they have to overthrow Hensell when he is presented as a good governor. It made that part of the plot feel rather weak.

I think that was the point. Bragen was stirring up the rebellion just as a way to seize power for himself.

It's such a shame that so many episodes were lost, and it's especially sad that the first Regeneration is among them.

The footage of the moment itself survives, thanks to a clip being shown on Blue Peter.

Also tagged with one or more of these keywords: Doctor Who, 2nd Doctor